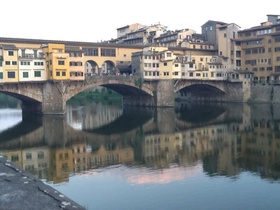 When I was twenty years old and about to start my junior year in college, I bid my parents farewell at the Greyhound depot in Twin Falls, Idaho. We wouldn't see each other, or even talk on the phone, until late spring the following year. After taking the bus to Salt Lake City, I flew to New York where I met up with other classmates. We got on a boat (yes, a boat!) and ten days later we arrived in Europe, ready to start our year abroad and our adventure as students at Gonzaga-in-Florence.

Now, after spending a week making our way from Rome, through Siena, the wine country of Tuscany, and Pisa, my husband and I have arrived in Florence for a reunion celebrating Gonzaga's fifty years in Florence. I wasn't in the first class half a century ago, but close enough that I'm senior status. As  I return, I reflect on that time long ago. I've done some traveling over the years, but as I've aged, the experience, as well as the world, has changed.

Our program allowed long weekends to explore other parts of Italy and Europe. We traveled cheap--by train, bus, even hitching a ride now and then. We stayed at pensioni and youth hostels, often sharing a bathroom with other guests. We carried lunches packed at our pensione back "home" in Florence as we set out on our weekend jaunts. If we ate at a restaurant we'd have primo or secondo, but rarely both. Our bible was a book called EUROPE ON FIVE DOLLARS A DAY. (You can get little more than a gelato for $5 now.) Purchases in Italy were made with lire. I can't remember the exact rate of exchange, but I think it was 500 to 600 lire per dollar. It made everything sound pricey, but we knew we were getting a deal and always engaged in a bit of bargaining with the vendor, claiming we were poor students. Every country had its own form of exchange. Girls wore dresses or skirts and blouses. You paid an attendant to use a public toilet.

Now . . . Hotel room with a private bath is required, no discussion there. Even grandmas can wear jeans. Public bathrooms, no charge. The value of the dollar has declined to the point that European travel is often more expensive than vacationing in New York. The euro has made it easier to travel from country to country. Of course, we are staying in nicer places now, eating in real restaurants, renting a car.

It's true that I didn't speak to my parents during that nine months, but we wrote weekly letters and sent postcards during our travels. Now everyone carries a cell phone. We chose not to bring ours, but I have my iPad and send pictures and messages, generally using Facebook, to reach family members and friends. I kept a journal during that year in Florence and took photos with my Brownie, using film that had to be developed. Now I keep notes and take pictures with my iPad.

Walking is still the best way to see the medieval cities of Italy. Now, my old feet hurt.

Yes, much has changed. But some things are the same. The Italians are animated and appreciate your efforts at speaking the native language, though their replies are generally in English! The bread, still wonderful. The handmade pasta, to die for. The gelato, if you don't know, I can't explain. I felt very lucky back then, and I'm grateful that I still have the opportunity for this grand adventure.