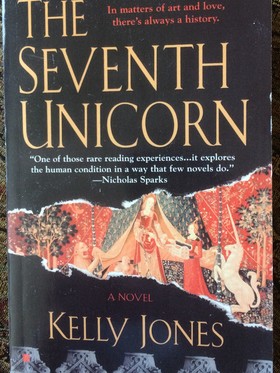 My first novel, The Seventh Unicorn, is set in Paris. It is, of course, written in English. I threw in a little French here and there to give it a local flavor, and also to remind my readers when the characters were actually speaking French.  I’d taken some high school French, but not feeling confident, I asked a friend, who’d attended an American Catholic school staffed by authentic French nuns, to give it a read.  I also alerted my agent to the fact that the French probably needed an edit. She assured me the publisher would take care of that.

Several months after publication, the email came from Claire L. (I’ll protect her surname, though it is a beautiful French name.)

She went on to tell me she’d loved the book, BUT . . . she couldn’t stand the mistakes in French . . . wondered if I didn’t think French people would read it . . . wondered if they didn’t deserve a little respect . . .

I wrote back and apologized.  Even after almost twelve years, this still bothers me, not Claire’s complaint, but the fact that I’ve probably insulted a lot of French speaking French! The book is still in print, probably still insulting the French.

Thank goodness most Americans who read the original won’t even notice, and the book was translated into French. (I assume they corrected my French.)

So once more, Je suis désolée, the French expression for, “I’m sorry,” which sounds so much more dramatic and much more devastating to the offender than a mere I’m sorry!

Hi, Kelly! Nice article. I am forever seeing actual typos (I'll grant they are not spelling errors!) in published books, since I read a lot for reviewing purposes. But this is a tad different. While I would not know the difference (I don't speak French), I can understand folks reacting to such a problem. Guess you just have to say "sorry" and move on knowing you tried. Good to hear from you!
-Linda Bond, September 22, 2017

Thank you, Linda. I'm sure with as much reading as you do, you see many "typos." Even with a good edit, they seem to slip by. Great to hear from you!
-Kelly Jones, September 30, 2017