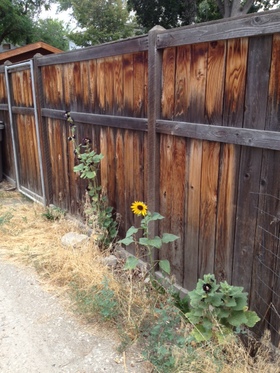 Who says the setting for a story has to be exotic.  In my novella, EVEL KNIEVEL JUMPS THE SNAKE RIVER CANYON, much of the action takes place in an alley.  Not a scary, thug infested alley, or a place my fallen hero, or heroine, might meet to score some drugs, but the alley of my childhood.  Kids nowadays don’t know about alleys, yet they were an important part of my growing up.  Everyone had an alley running behind their house.  It was in the alley that I met my childhood best friend when they moved in on the other side, their house facing one street over.

Alleys were lined with delicate blue blossoms, sunflowers, and hollyhocks that could be made into dolls and princesses with colorful skirts and knobby heads.  Sometimes we’d even find asparagus growing along the alley, not that I had any use for asparagus at the time.  My brother and his friends used to go “garbage snooping.”  Once he found a collection of phonograph records and once an old chandelier, thrown out for the trash man.  He took it down to the surplus metal dealer and made more money than a summer’s worth of allowances.

My youngest brother was playing in the alley once and the service company cleaning the furnace down at the church on the corner had dumped a bunch of chemicals in the alley. He came home screaming, and my mother, who seldom panicked, did. She rushed him to emergency as the chemicals ate a hole through the flesh on his neck.  Didn’t those stupid men working on the furnace know kids played in that alley, that this was a place of adventure and excitement?  A place where a kid could feel perfectly safe.  My brother still bares a small scar from that adventure.

Oh, and also—there were some really cool rocks in that alley.