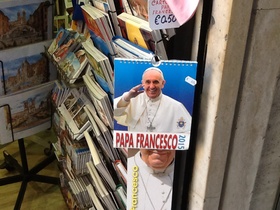 I really like our new Pope. We're in Rome, and I was hoping to catch a glimpse of him. I had an inside track, a plan. Years ago (thirty, I think), my brother Brian was going to school in Italy.  My sisters, Mom and Dad, and I came over to visit. We were in Rome during Holy Week, and Brian took us to the church of  San Giovanni in Laterano on Holy Thursday.  He explained, though it wasn't advertised or announced, the Pope would say Mass on Holy Thursday at San Giovanni's.  Most people don't know the Pope has his own church in Rome, and, no, it is not St. Peter's. Back then we went to the Pope's church and sure enough . . .
So Jim and I stopped by the church early in the day on Holy Thursday. In the gift shop I asked the smallest, oldest nun I have ever seen, if the Pope would be there that evening. She had to be near ninety and wore the traditional habit, so I figured she probably didn't speak English. In my best, very simple Italian, I asked, "This evening, it's possible, the Pope, here?" Without hesitation, she replied, "A cinque." She held up five fingers.
As we left the church, I turned to Jim and told him I'd asked, in Italian (yes, I did feel quite proud of myself), if the Pope would be here and she said yes. I still, for some reason, felt a little skeptical, though I knew it was tradition for the Pope to say Mass here on Holy Thursday.
Jim replied, sensing my doubt,"You think a nun would lie?"
Later that afternoon, we returned, arriving early to get a good seat. And we did--front section, me on the aisle. The church filled up, my excitement building. I really like this new Pope and I was going to see him. The procession of dozens and dozens of priests marched in. The choir sang, the congregation stood. The priests wore identical white cassocks, save for one wearing a tall bishop's hat and embroidered vestments. Closer and closer, within feet--I could have touched him. But, as I made out the details of his face, I saw that this was not my Pope. I turned to my husband, disappointed. He whispered in my ear, "The old bait and switch."
Admittedly the service was beautiful. In Italian, it reminded me of the Latin Masses of my youth. The choir, all in red robes, sang, and the soloist sounded like an angel. The bishop or cardinal,  or whatever the celebrant was, washed the feet of dozens of priests in the traditional ceremony.
I confess we left a little early. My Lutheran husband had endured two and a half hours, though graciously. As we strolled across the large, empty expanse of the Piazza, he commented on the fact that maybe my nun had lied to me. He didn't mention my Italian might have been off a little when I'd asked about the Pope. But I knew that wasn't the case, and I realized I had asked if it was " possible." I believe the nun really thought it was "possible" that the Pope would come to say Mass at San Giovanni 's on Holy Thursday, as Popes had for centuries.  The hundreds of people who showed up probably thought that too. We wanted to see the Pope!
We joked a little about how this new Pope was setting his own agenda, how he was probably driving the traditional powers-that-be at the Vatican a little nuts. Last year Pope Francis said Mass and did the traditional washing of the feet in a prison. This  year he went to a home for the elderly and infirm. Probably about the same time I was at Mass at San Giovanni. Does it seem that perhaps he is doing exactly what Jesus had asked of us . . .
Did I happen to mention I really like this new Pope

Beautifully written and executed, Kelly. I was right there with you!
-Kathy Polzin, April 18, 2014

Thank you, Kathy. We're having many adventures here in Rome. Wish I could share the taste of the gelato and the smell of the pizza, too!
-Kelly Jones, April 19, 2014

Fantastic story ... I was a a Maundy Thursday service at Beautiful Savior Lutheran Church here in Boise and it was a great service and you guessed it no pope. And the more I read about this new pope the more I agree ... I like his style :-)
-kmiracle, April 19, 2014