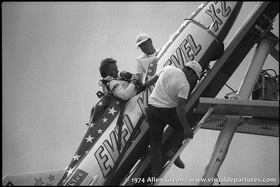 
Forty-three years ago today Evel Knievel strapped himself into his skycycle and launched himself across the Snake River Canyon just outside my hometown of Twin Falls, Idaho.

At the time I was living in Boise. Like many former residents, I returned home to witness this historic moment in 1974. I sat with anticipation, with other family members, as the cycle (billed as a flying motorcycle but closer to a mini rocket) shot upward into a lovely blue sky on this typical, though anything but, late summer day in Idaho.

Forty years later, as a number of promoters were stirring up interest in the anniversary with promises of another jump in a skycycle replicated from Evel’s original plan, I decided to tell the tale myself. Being a fiction writer who often uses real events to tell a story, I started doing some behind the scenes research. I talked to those who had been there, scrolled through newspaper articles at the Twin Falls Public Library, read Evel Knievel books and magazine articles. What I learned inspired me to use the voice of a young boy to tell the story. It became a tale of small town values. It was not the braggadocio who got attention by jumping lines of cars and busses on his motorcycle, a man worshiped by impressionable kids, who played the hero in my story. It was the ordinary people much like those I grew up with in Twin Falls.

My story was published in 2014, the fortieth year after the Evel Knievel launch, though the promoters promising another jump didn’t deliver until two years later, and with little fanfare. Without Evel, the promoter, the consummate showman, the interest just wasn’t there. Even though, unlike Evel’s launch, this forty+ years-after-the-original made it to the other side of the canyon.

If you’d like to read the story, it is told in Evel Knievel Jumps the Snake River Canyon . . . and Other Stories Close to Home. Books are available at the Twin Falls Visitors Center, Rediscovered Books in Boise, select Barnes & Noble bookstores, and online as a paperback or eBook. www.amazon.com/Knievel-Jumps-Snake-River-Canyon/dp/0991446801/ref=asap_bc