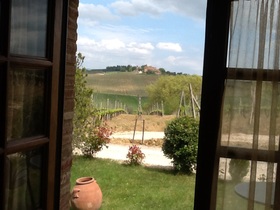 At a recent library book event, where I was discussing and reading from my most recent novel, LOST AND FOUND IN PRAGUE, a member of the audience asked, “Which of your books is your favorite?”

I hesitated for just a moment as if I had to think about it.

My children have been grownups for some time now, and I’m well into grandma mode. But, I’m still birthing books. While I don’t have a favorite book, I must confess to a favorite setting.  My novel, THE LOST MADONNA, is set in Florence, Italy.

I’ve started a new novel and for a second time I’m using an Italian setting. I’m also doing something I’ve never done before—I’m writing a sequel. While I won’t admit to a “favorite character,” I felt I wasn’t quite finished with Dana Pierson and Father Giovanni Borelli from LOST AND FOUND IN PRAGUE. They are moving on to Italy for another adventure. If you’ve read the book set in Prague you might have had a hint of this.

I’m about halfway through the first draft of the story set in the wine country of Tuscany. I’m not sure if my characters will make it to Florence, but I certainly hope they do.  I spent my junior year of college in Florence and traveled throughout the country. For me, there’s something special about Italy. Maybe it just makes me feel young again. Or maybe it’s the wine, the pasta, the cappuccino. It certainly could be the art, the architecture, or the Italian people. Or the beautiful hills and vineyards of Tuscany. Whatever it is, I love Italy, and I’m so happy to be back.  Even if, for now, it is just in my imagination in telling a new story.