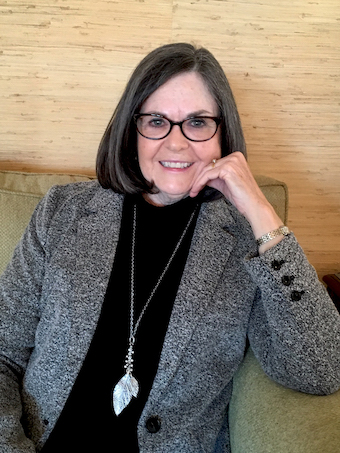 Kelly Jones grew up in Twin Falls, Idaho. She attended Gonzaga University in Spokane, Washington, graduating with a degree in English and an art minor. She spent her junior year in Italy at the Gonzaga-in-Florence program and developed a love for travel, a passion she now shares with her husband, Jim. An art history class in Florence fueled a love for the history of art, which has become an integral part of her writing. She is a mother and grandmother and is married to former Idaho Attorney General and retired Supreme Court justice, Jim Jones. They live in Boise.

Bloodline and Wine is your first sequel, and now you’ve added a third book, Angel Boy, to the Dana Pierson series. What made you decide to continue writing about Dana Pierson and Father Giovanni Borelli after introducing them in Lost and Found in Prague?

I’ve always believed that a good story will leave the reader, after they have turned the last page of the book, feeling that the characters will continue. But I’ve always left this "after story" up to my readers to imagine. I've never felt a need or desire to write a sequel to any of my other books. But, with Dana Pierson and Father Borelli, I knew there was more to each of their stories, and, in a way, I felt I owed it to Dana to continue telling her story. In Bloodline and Wine, I’ve also introduced some additional characters whom I’ve grown very fond of, particularly Mia Antonelli, Winkie Dalton, and Giovanna Veronesi. Mia shows up again in Angel Boy when she comes to stay with Dana in Boston. I enjoyed writing about this sweet and feisty teen.

Did you always want to be a writer?

No! In high school I was a member of the Quill and Scroll, an international honor society to recognize students for their “meritorious” work in journalism, though I wasn't a writer. I served as art editor for the yearbook. I went on to earn a B.A. in English with an art minor, but didn't take any creative writing classes until years later while raising my children. I started writing some short fiction then. By the time I published my first novel I was a grandmother of five.

What kind of work did you do before becoming a writer?

I've had a variety of jobs including working in my family's meat packing plant, waiting tables, managing a car rental agency, and serving the public as a tax specialist.

Where do you get your ideas?

My ideas usually begin with an object, place, or event, and then the characters make their appearances. Inspiration for my first novel, The Seventh Unicorn, was a replica of a medieval tapestry received as a birthday gift. The Lost Madonna came from a love for the city of Florence, Italy, and Renaissance art. A number of things moved me toward writing The Woman Who Heard Color, including a desire to learn more about the modern art movements in Europe, and an interest in the condition known as synesthesia.

Lost and Found in Prague started with the image of a small religious statue found in a church in the Mala Strana section of the city.

Bloodline and Wine was inspired by the Brunello di Montalcino, a wine produced only in Montalcino, Italy, where the family of Father Giovanni Borelli owns a vineyard and winery. In the third Dana Pierson novel, Angel Boy, a series of articles that Dana wrote, covering a number of horrific incidents in the Catholic Church, plays an important part in the story.

My collection of stories, Evel Knievel Jumps the Snake River Canyon...And Other Stories Close To Home, is a compilation of stories I'd written over a number of years and very different in setting from my other books. The place that inspired me was my own hometown of Twin Falls, Idaho, and the event, Evel Knievel's attempt to jump the Snake River Canyon.

Do you always visit the places you write about?

My husband Jim and I love to travel and, yes, we visit the cities in which my stories take place. In doing research for The Seventh Unicorn we went to Paris and Lyon. I've been to Florence, Italy, the setting of The Lost Madonna, several times, both before and during the writing of the novel. I lived in Florence for a year as a student and it is one of my favorite places.

I returned to Italy, specifically the Tuscan wine country, while writing Bloodline and Wine. Unfortunately, our trip to Boston, the setting of Angel Boy, was canceled because of the Covid pandemic. I had visited many years ago but had to rely on friends from Boston to answer my questions about the city.

How long does it take you to write a book?

Difficult question, because I do so much rewriting. From inspiration to publication, my first book took seven years, but a good portion of that time was spent looking for an agent. The Woman Who Heard Color went through at least seven or eight drafts. This one took an exceptionally long time, mostly because I just couldn't get the story right. And because it covered a period of over 100 years.

What is your advice to aspiring writers wishing to publish?

Don't give up! I spent years just trying to find an agent, and yes, if you want to publish fiction traditionally, you really do need an agent. I'd also advise writers to enjoy the process of writing. Believe in yourself, but be open to suggestions and advice. I've belonged to several writers' critique groups and have found this especially helpful. I've learned so much from other writers and feel fortunate to have made good friends in the process of sharing work. I also have several non-writer readers for whom I'm very grateful. They are all listed in the acknowledgments of my books.

Another important piece of advice to writers, read!

What do you do when you're not writing?

I love to read, go to the movies, and spend time with my family. I've got three children and seven grandchildren all living close by, and my parents, brothers, and sisters and their families are mostly still here in Idaho. I genuinely like every one of my five siblings and have to give my parents credit for that.

Although I'm kind of the sit-curled-up-with-a-good-book type, I attempt to exercise now and then. My husband and I enjoy walking and biking, and Boise is a perfect place for both.

The setting of the story is very different from those of your earlier works. What inspired you to write about Evel Knievel's attempt to jump the Snake River Canyon?

I was there as a spectator when the big jump took place. At the time I had no aspirations to be a storyteller. Fast forward forty years...I'm a published writer, and there has been renewed interest in “celebrating” the 40th anniversary with another jump. This caused me to take a look at the past event and the effect it had on my innocent little hometown of Twin Falls, Idaho.

What made you decide to tell the story from the point of view of a ten-year-old boy?

When I decided to tell the story I looked at it from several angles. I was eight months pregnant at the time and thought about telling it from a woman's point of view. But, after talking to several family members who'd been there, the most interesting stories, and the ones that really juxtaposed the innocence of the town and the invasion of Evel Knievel's big-time promoters and the motorcycle gangs, came from my much younger brother. Thus, Pick was created to tell the story.